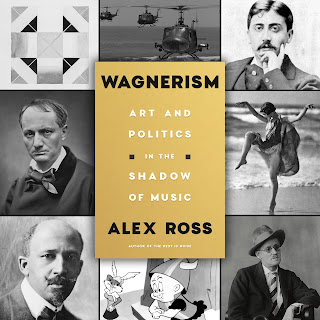 In his first book, Alex Ross introduced more people to "modern" classical music then NPR and the BBC had managed to do in both organizations existence. He made Schoenberg, Weber and the band not only interesting but approachable for a listener perhaps more comfortable with Mozart's Greatest Hits, the Four Seasons or the first and last movements of Beethoven's 9th (not that there is anything wrong with any of those). In "The Rest Is Noise" he somehow, stripped away decades of obtuse, perhaps even intimidating, music discussion. This, then,  seemed to allow people to find the sheer joy that exists in "modern" music. I might argue that the growing popularity of "modern" classical both in the concert hall (remember those?) and on record, was begun by Ross' book.  My hope is that he manages to do similar for Wagner in his new book Wagneriams. Not only that he can deconstruct and strip away, many of the common misconceptions about Wagner but he, too, increases his popularity among those that would rarely, if ever, consider listening to Wagner's work. As to whether he does either?  Well, it is perhaps too early to say, but an indicator may be that more general podcasters, with no real interest in Wagner, are discussing this book. An example of which is below, with presenters so unfamiliar with Wagner that it begins with a debate on how to pronounce Wagner's name!

I think this is interesting to both those with a strong knowledge of Wagner and those without. From "BookMusic.Com".