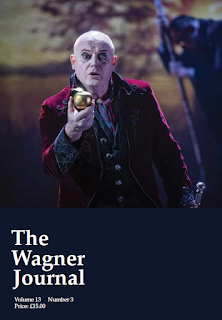 Always exciting. Of particular attention, I feel, is the article ‘Knappertsbusch in Bayreuth’, which reveals the full story of the maestro’s machinations to ingratiate himself - unsuccessfully as it turned out - with the Nazi regime. I think that many who hold him in high regard for his legendary Wagner interpretations will be shocked when they read this.  Highly recommended.

The November 2019 issue (vol.13, no.3) of The Wagner Journal has been published and contains the following feature articles:

•’Ernest Newman in ‘’Naziland‘’: In Search of Otto Strobel‘ by David Cormack

plus reviews of: Tannhäuser at the Bayreuth Festival, Das Rheingold at Longborough and Grimeborn, Die Meistersinger by Fulham Opera, Die Walküre in Kassel, Götterdämmerung in Würzburg and Lohengrin in Nuremberg; the Bernstein Tristan und Isolde (Munich, 1981) on DVD; CDs of the Hallé Siegfried and of Lise Davidsen in Wagner and Strauss