Death and the Master: Original obituaries and reports from Richard Wagner’s death in 1883 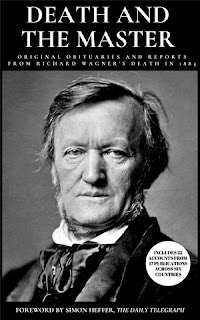 Not too sure who but we would be interested in this but we thought you might be too.  The description below is from the publisher.

This exceptional collection features 22 contemporaneous, original obituaries, personal recollections and news reports following Richard Wagner’s death in 1883, taken from 17 separate publications in six countries across the world. The accounts, gleaned from the archives of music journals, magazines and newspapers, such as The New York Times, Le Figaro, Berliner Tageblatt and The Times of London, amount to more than 45,000 words. They allow the reader to gain a unique perspective of the controversial composer and to understand how the world regarded him at the time of his death. It is the immediacy of that perspective, and what it tells us of the context in which Wagner lived and died, that makes this compilation such an engaging and distinctive read. Each account is packed with many fascinating insights into the composer’s tumultuous life and the complex, powerful personality of the flawed genius who revolutionised classical music. In his foreword, Simon Heffer, the esteemed columnist on Britain’s Daily Telegraph newspaper, hails Death and the Master as a “riveting collection” and a fine addition to the long list of books on Wagner. He writes: “The appreciations… make the perfect introduction to him and his art: reading them will give one a clear idea of his context and his stature. Not only should they serve to welcome many new listeners to his music, but they will intrigue seasoned ones, too.”