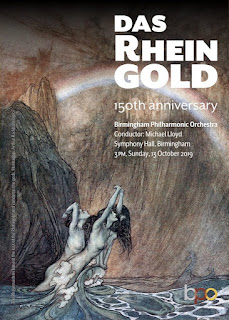 It would seem a terrible shame to miss this one.

2019 is the 150th anniversary of the first performance of Richard Wagner’s opera, Das Rheingold (22nd September 1869) – the Birmingham Philharmonic Orchestra will be performing the opera on 13th October 2019 in Birmingham’s Symphony Hall

The cast includes 14 fantastic soloists including internationally and nationally renowned performers who have performed in opera houses and concert halls around the world including previous performances of Das Rheingold at Bayreuth.