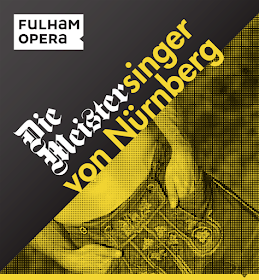 
Fulham Opera, is to stage its most ambitious project to date in central London this August: four performances of Wagner’s Die Meistersinger von Nürnberg.

Die Meistersinger, which is one of the biggest works in opera repertoire, will be performed in a new production, directed by Paul Higgins and conducted by Ben Woodward, Artistic Director of Fulham Opera. The production features a specially commissioned new orchestral arrangement by Jonathan Finney, for eighteen instruments.

Fulham Opera’s Artistic Director and conductor, Ben Woodward says, “Die Meistersinger is absolutely huge, and more challenging than our two last big productions - The Ring and Don Carlo - put together. I am thrilled to have singers on board that I have been looking forward to working with on this repertoire for some time. It might be the biggest, maddest project that a fringe opera company has ever undertaken, but we do feel ready for this to be our next step.”

Regarded as a leading light in London’s ‘fringe’ opera scene, Fulham Opera’s combination of ambitious, big repertoire and superb professional singers has brought it great critical acclaim. It has developed a strong reputation for its performances of Wagner and Die Meistersinger will be its sixth Wagner opera, including two complete Ring cycles, since the company began in 2011.

Director Paul Higgins says, “We can very easily recognise ourselves in the characters in Meistersinger, and we can see our own struggles and ambitions. There are so many strands to this opera, such elitism versus populism, old versus the young, those who belong and those who do not, and a community jealousy guarding its independence and becoming more inward-looking than they had been before. Today we are witnessing a rise in nationalism across the world, and in particular in Europe, and in the UK we have Brexit. In 2019 the issues raised in Die Meistersinger seem even more relevant today.”

This huge project brings Fulham Opera to perform in central London for the first time. With a cast and chorus of fifty-seven singers, it also marks the first time the company will have performed in a full-sized theatre.