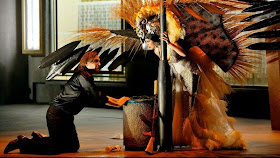 Indeed, according to the German press, not only did this lead to much booing, and a few members of the audience walking out, but so shocked by the killing of Fafner with a rather loud machine gun, that one unfortunate audience member collapsed - we assume not because of "positive swooning" - and needed to be carried out of the theatre.

We await with interest the final instalment - especially as any renewal of the Wagner's contracts as Directors  may rely heavily on this cycle being an overall success.

Our advice to Frank? It seems you should just carry on making the Ring a...well "Carry on Ringing"
People seem to love it. Might we suggest the following as research?