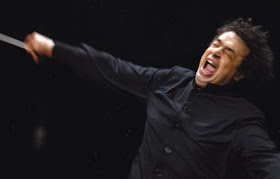 The engagement diary of a leading conductor can reveal many things: musical taste, status, popularity with players, administrators and audiences. But rarely has a schedule acted so neatly as a potted biography as Semyon Bychkov's does this month. November's concerts have included performances in St Petersburg (where he was brought up and trained as a musician), Vienna (where he arrived in 1974 with $100 to his name as a Jewish exile from the Soviet Union), the US (where he made his home and established his musical reputation), Tel Aviv and London (where he has recently been awarded honorary positions with both the BBC Symphony Orchestra and the Royal Academy of Music). "I wish I could say it was all a magnificent design," he shrugs, "but there was no design. However, when the pattern was pointed out to me, the symbolism was unmistakeable."

That Bychkov's 60th birthday also falls this month adds to the seeming import of these trips down his personal memory lanes. "It is interesting that all this comes around the time of an apparently significant birthday, when it is common to look both forward and back," he says. "Over the years I have played music I have often felt that my relationship with time is a little strange. The past and the present do sometimes come together in the most unexpected ways."

The day after he arrived in Vienna in 1974 Bychkov found himself standing in front of the Staastsoper watching the audience go in to see a new production of Wagner's Lohengrin. Thirty years later to the day, he was the conductor of a new Staatsoper Lohengrin. His prize as an outstanding student in Leningrad was to conduct Rachmaninoff's second symphony with the Leningrad Philharmonic, but his application for an exit visa ensured that the authorities stopped the concert. On his first return visit to his conservatoire in the city 35 years later, this was the piece he conducted.